What to do with hole-y socks Part 3

Re-purposing these socks makes me happy. I spent a lot of time knitting them and only a small part of each sock is worn. So making something useful out of the sock and using it for many years makes me happy. I get warm fuzzies when I pick up something that was made from a worn-out sock. For example, my oil bottle and WPI tool live in a bag made out of a sock foot. I use that bag all the time and it makes me happy. Also, old fabrics are soft and lovely to the touch. I like old cotton, silk and wool. They gain a patina with age.

I have a metal Sigg bottle and I drink both cold and hot water from it. The hot water habit came from China where it is readily available for tea. Indians and Chinese believe that drinking hot water is better for you than drinking cold water. The problem with both hot and cold water in a metal bottle is that the bottle either sweats from condensation or is too hot to touch. A bottle cozy seemed like the perfect antidote to both. 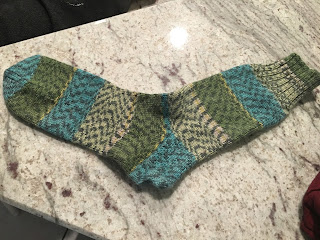 Big hole in the heel. All my socks wear there. So you won't find a lot of things made with heels in this series :-) I've thought about using the heels from the other sock in the pair but when I've examined them, the fabric is thinning and I don't see the point in making something that is going to wear quickly. I try to use the parts that are solid in these projects.

If you are wondering why I developed holes in so many socks all at once, the answer is easy. I didn't. I just have been saving pairs of socks with holes for inspiration and time. I did a number of projects a few years ago, which is where the oil bottle bag came from, but I gave most of them away. I made cuffs and cup cozies, which we will discuss later, and took them to the yarn store where people just snapped them up.

The main part of the bottle cozy is the leg of the sock. I cut as close to the heel as I could and separated the leg from the rest of the sock. The bottom of the cozy came from the foot. Since I had a solid piece of fabric on the foot - the sole was not worn there - and the bottle fit on the folded foot, I decided to use a doubled fabric there. I could have cut the foot lengthwise and spread it open to get a bigger circle. The reason I did it the way I did was that there were two spots on the bottom that weren't cut so that made things easier for sewing. I just put the bottle on the sock foot and cut it out leaving a bit of extra width on the cut parts. I found that pencil and ball-point pens don't mark the sock sufficiently. If I had tailor's chalk, that would have helped. But I was too lazy to go up to the sewing supplies and see if I had any. I winged it. 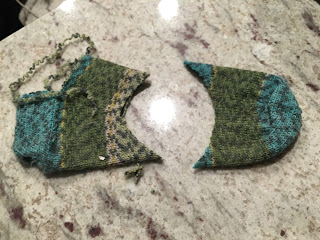 That is the foot after the bottom piece was cut out. 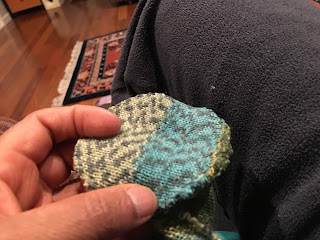 And here's the cut piece. After I made this cozy, i started experimenting with stabilizing the cut edge. This is more important for the fingerless mitts and I will do a tutorial on that shortly. But after experimenting with a crochet steek technique, I found that just doing a back stitch with doubled sewing thread is less bulky and much easier. The sts on socks are so dense due to the the tight gauge (8.5-9 spi) that it is really really hard to get a decent-sized crochet hook through the sts. The hooks that did fit easily split the yarn. I even tried crochet cotton but what I had was too thick for the crochet hook. I think a thinner cotton might work. But the back-stitch is so easy and fast and so much less bulky that I think it is the best method for these small items. It also gives you a lot of control in terms of placement.

One of the real advantages of re-purposing socks is the ability to experiment. You learn how knitted fabric works and you can play around with practicing skills - like grafting - or with different ways to stabilize a cut steek. Socks are usually made from superwash yarn so they are much less forgiving than most other wool yarns which will eventually felt. If it works for a sock, it will probably work for a bigger piece. And, these are small projects which don't take much time - so one can afford to experiment. If it doesn't work out, oh well!

I did not stabilize this. I just sewed it as it isn't a join that will take a lot of stress. 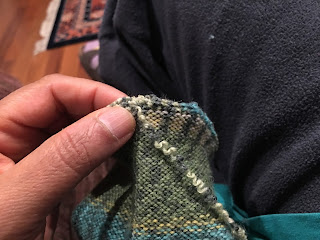 The photos above and below are of me sewing the bottom to the top. As you can see, I just use the thread as it comes off the sock. The waviness is very pronounced as it has been in that configuration through many washes. I just pull it tight as I sew and it straightens out into the new configuration once the cozy is washed and dried. It might feel a little crunchy before it is washed but that goes away. The crunchiness is because the thread has extra folds in it . 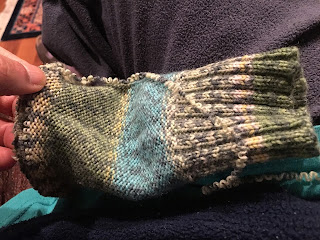 I didn't pin this. I eyeballed it. You have to ease the circular sock leg around the circular bottom as you sew. If you are more comfortable with pinning, pin in quarters and then make sure you are sewing the matching parts together. Otherwise, it will torque in one spot and bunch up in another.

I used a running stitch with small stitches to do the sewing and then whip-stitched the cut edge with the rest of the yarn. If I had stabilized the edge, I probably wouldn't have needed the whip-stitching. I think I will go back and sew the seam allowance to the top so it doesn't lay flat and make the bottom bulky. 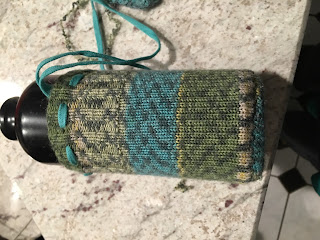 I collect other bits and bobs that might be useful in re-purposing socks. Sometimes I have to buy new things, but it makes me happy to reuse buttons and other things in these projects. I had a new single shoe-lace in my basket which matched. So I threaded that through for a handle. I was able to thread it with just the plastic end of the shoe-lace. 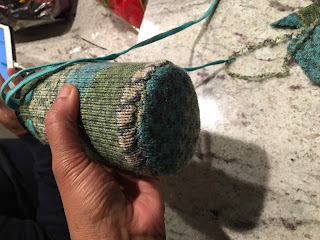 There's the sewn on bottom. I manually pushed the seam allowance around the top, which is why I think I will sew it down that way. If part of is in down on the bottom of the bottle, it makes the bottle unstable. 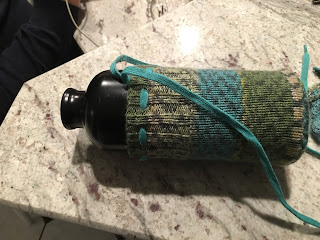 And there it is. The finished cozy. If you have a bigger bottle, you may want to use both socks. Sew one leg to the other as we did for the headband and then add the bottom. In my case, the leg was sufficiently long. I would have liked another inch at the top but wasn't prepared to use the other sock for that inch.

Next time we will make coasters.
Posted by Jaya at 10:11 AM